Conversations With Love 26 is LIVE!

This week, Spencer crosses off a name on his dream interview list, as he chats with former Stampede Wrestling and PWA star Tex Gaines! Find out more about one of Alberta’s longest-tenured talents, including:

On wrestling Abdullah the Butcher for the PWA:

“That was a bloody match. There was a LOT of blood that night.”

“I only fought (Abdullah) once, and it was funny because it was supposed to be me and Abby one-on-one. Kid Nichols – Hannibal – was here for that match, and all of a sudden it was going to be a handicap match. I’m like – and Nichols knows this, no word of a lie, there’s no love lost – I said ‘Nichols, you f*****g touch me, and I’m going to stab you in the eye. You’re not touching me. You and I, we don’t get along, we don’t see eye-to-eye, you’re not touching me. I don’t trust you, I don’t like you, you don’t like me, go f**k yourself. Don’t touch me, or I will kill you. There was no if’s, and’s or but’s about it.”

“Then, they (management) were like ‘well, do you have a tag partner?’ I was like ‘no one else wants to be in this match! They know how much blood’s going to happen!’ So, Slammer (Brice “the Slammer” Sova) had just come to Alberta, and he had been helping us out doing ring crew and that. I walked out to the crowd and asked ‘hey Slammer, have you got your gear?’ He said ‘of course; you always bring your gear.’ I said ‘great! You’re my tag partner tonight. You’re fighting Nichols, because if he touches me I’m killing him. I’ll fight Abby, you fight Nichols. If Abby goes at you, so be it.’”

“Somewhere along the line, Nichols was the one who gaffed Slammer the hard way, and there was so much blood at that part – which was fine, because it was an Abby match. I mean, Tex Gaines and Abdullah the Butcher, you know what it was going to be; warn the children to leave the arena, because there’s not going to be anywhere that there’s not blood.”

Why he never faced Abdullah in Stampede Wrestling:

“It was partly timing and all that, but it was also…history says it, but some of the Hart’s weren’t great with paying their bills and paying people. You either got creative with how you were going to get your money, or, you nickel and dime them to get your money. I think it was just that they weren’t able to get him to agree, because he had worked with them years and years before.

“When we (PWA) got him, it was like, ‘well, who wants to wrestle Tex Gaines,’ which was like ‘okay, that’s fine,’ but then it became ‘who wants to wrestle Tex Gaines and Abdullah the Butcher?’ and everyone’s hands went down. Now, some of them are a little bit better about it, but then right after that was the whole hepatitis scare and that so again, for the next two years, I’m testing every month and making sure (we’re okay).”

“In wrestling, you have to be a little bit of a masochist.  You honestly do, because you’re beating your body up. Whether someone hits you and you go down, or you go down willingly, you’re hitting the ground. There’s no ifs, ands, or buts about it. Blading – as archaic and out-of-date as it is – was better than being busted open the hard way, because you can control it more. You can control the blood a bit more, it’s easier to close, it’s easier to heal to go out the next day and go wrestle.”

“It doesn’t always make sense when you think ‘you just cut yourself, what’s wrong with you?’ I’ve been busted open the hard way – ‘oh, of course my nose hasn’t been flattened out a couple of times, I haven’t broken a bone in the middle of the match’ - it’s just one of those things that takes a lot, and if you’re squeamish, you’re going to f**k it up.”

“There is an art to it. There’s an art to where the blade is, there’s an art to how you protect yourself and your opponent, and the referee, and the crowd. I’m going to say this, and this is said very loosely on this one, it’s becoming a lost art. Not everyone knows how to do it, not everyone is going to know how to do it, and a lot of people don’t need to do it, but it can be very, like, ‘what are you doing?’ If you’re going to get colour as we call it, there’s a timing for it. There’s a place for it.”

“It does happen accidentally. I’ve had my eyebrow ripped off, I’ve had my nose crushed, you name it.”

On becoming a hardcore wrestler:

“I’m a little bit insane. I grew up in a large family with lots of fighting. Getting in a fight is what it was. I’ve got tons of brothers and sisters, so if you get punched in the face, you get up and you go. The simple rule is you don’t stay down. It was just one of those things where someone said ‘hey, you’re doing this kind of match. ‘Yeah, okay.’ ‘Hey, we need someone to do this kind of bump. Does anyone want to do this tonight?’ ‘You want me to go through a table? S**t, I’ll do it.’ 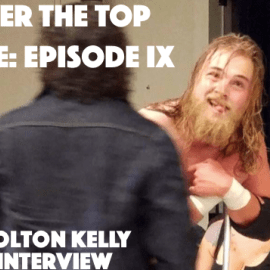 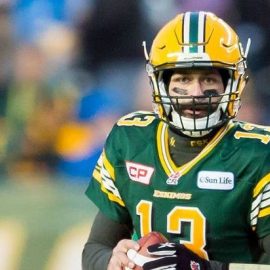