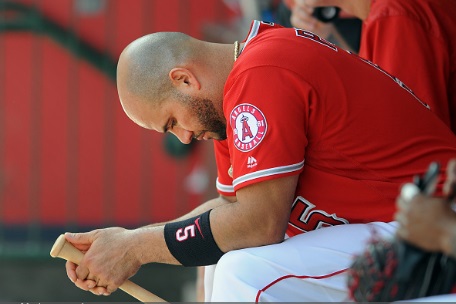 The end of the baseball season brings the beginning of Winter Meetings. A time where all baseball fanatics put on their General Manager hats and begin to work on their ultimate roster for their favorite team, scanning and dissecting the upcoming Free Agent list and those rumored to be on the trade market.

Giancarlo Stanton‘s 13 year/$325, currently the largest contract in MLB, is rumored to be up for grabs since Derek Jeter and company bought the Miami Marlins. Even with Stanton only being 27-years old, the word “untradeable” is kicked around because of the price tag averaging $25 Million per year and his significant injury history.

However, nobody really believes he cannot be moved due to his outstanding 2017 campaign where he hit a league-leading 59 homers and 132-RBI’s.

To make a whole room nod in agreeance in bobblehead fashion, simply say “the untradeable contract of Albert Pujols”.

While it may pale in comparison to Stanton, the contract is deemed “untradeable” because he is merely a shell of his former MVP self, literally falling off a cliff. It is safe to say his 2015 All-Star appearance will be his last for the now 38-year old.

In 2017, Pujol’s slash line of  .241/.286/.386 was a career-worst to go with career lows in walks, runs, doubles and home runs (in a full season). This provides little hope and reason to believe Pujols will recover any of his old glory of back-to-back MVP’s and Silver Slugger Awards.

Armchair GM’s try to argue that the Angels should trade Mike Trout to re-stock (no pun intended) the barren minor league shelves. Definitely a plan that would be easier than trading the Pujols contract and possibly better for the future, but living a world where you want to succeed immediately, keeping Trout is a must.

WHERE TO MOVE PUJOLS?

Obviously, to move Pujols you are going to need to take back an equally atrocious contract. The Detriot Tigers have two of them in Cabrera and Jordan Zimmerman.

The Tigers have 35-year-old Cabrera with 5-years left on his contract totaling $152 Million who looks to be on the downward decline suffering career lows in production at the plate. It is as if he was playing with kryptonite around his neck during the 2017 season with 16 home runs, 60-RBI’s, 50 Runs scored and a paltry .249 average. Numbers not seen since his rookie year, 14-years ago, where he only played in 87 games.

However, an even more atrocious contract to acquire would be starting pitcher Jordan Zimmerman. Zimmerman’s remaining $74 Million over the next three years has Tigers fans willing to teach you new curse words.
There is no disguising the fact that Zimmerman has been terrible in Detriot, tying the Major League record in ER’s allowed with 108 and second-worst ERA at 6.08. Although, if he can recover any of his Washington Nationals mojo where he was a two-time All-Star, he would be an upgrade to an Angels rotation that recently bought out Ricky Nolasco.

However, with Victor Martinez already on the Tigers roster as a player with no mobility, Pujols becomes redundant. Sending Martinez’s expiring $18 Million dollar contract to the Angels clears up that congestion and begins to level out the salary swap. The Tigers are looking to dump salary, this definitely fits the bill.

CAN IT BE DONE?

Is the scenario perfect? No. Does it get Albert Pujols out of LA to try to give the Angels some long term cap relief to better support Mike Trout? Yes. Does it shed two contracts the Tigers want off their books in one fell swoop? Yes.

If you think no one will take the atrocious contract, remember when the LA Dodgers bailed out the Boston Red Sox taking Carl Crawford off their hands. There is hope Angel fans