Once upon a time, there was a hockey player who played for a few NHL teams, most notably the St. Louis Blues where he amassed 139 points and 186 penalty minutes during 225 games in his last 3 seasons from 2007-2010. He was aggressive on the ice in both physicality and offence. He earned two seasons with at least 50 goals, two seasons with 40 goals, as well as 255 penalty minutes in a single season with the Winnipeg Jets. He met a lovely lady named Chantal while he played in Winnipeg and they got married and had 3 kids. And that is just the beginning of this story.

But this isn’t a story about that NHL player. This is the story of his oldest son, Matthew, who was born in 1997 and grew up playing hockey just like his dad. This is a story about how hockey is in their blood and runs through their veins.

Matthew has more points (130) than any St Louis Blues player did on their 21st Birthday.

Couple of Tkachuk pics from 2001. pic.twitter.com/O0A5ogzqsl

Matthew Tkachuk was born on December 11th, 1997 in Arizona, where his dad, Keith Tkachuk, played professional hockey in the NHL. He grew up around the hockey world and his dad was an NHL All-Star. In 2001, the family moved because his dad had been traded to the St. Louis Blues. Matthew grew up surrounded by the Blues hockey club. In 2010, his dad retired from hockey, but hockey never really lets go and Matthew continued the tradition in their family.

Matthew Tkachuk played pee-wee hockey with the St. Louis Blues minor hockey team and then passed over his NCAA eligibility to play for the London Knights in Ontario, Canada. In 57 games with the Knights, Tkachuk notched 30 goals and 77 assists along with 80 penalty minutes. That same season, during playoffs, he would add 20 more goals and 20 more assists in 18 post-season games as well as another 42 penalty minutes. Young Tkachuk was the second-ranked North American skater by the NHL, which caught the notice of the Calgary Flames.

Matthew Tkachuk with his dad after scoring the OT winner in the Memorial Cup Final. Special moment. pic.twitter.com/kw9h8OYl7b

The Calgary Flames drafted Tkachuk with their 6th pick in 2016, but it was a rough start for the young player. He was suspended three times in his first two seasons with the team. The first came after an elbow to the head of Drew Doughty in the Flames matchup against the L.A. Kings in March of 2017. The second suspension came later the same year, in November of 2017 after Tkachuk was involved in a line brawl against the Detroit Red Wings. Lastly, his third suspension happened early in his second season for a spearing incident against the Toronto Maple Leafs in December of 2017. After all of that was over and done, Tkachuk really began to find his stride.

With a reputation for being gritty and aggressive, Matthew Tkachuk moved on to become an important part of the Calgary Flames organization. He made his statement early and moved on to refine his skills throughout the following seasons. Everyone has come to like Matthew for what he brings to the ice, except the opposition. His dad, Keith Tkachuk, had earned himself 255 penalty minutes in a single season (1993-1994) with the Winnipeg Jets. Matthew seemed to be following in his dad’s footsteps during his debut season, 2016-2017 with the Calgary Flames when he notched 105 penalty minutes in 76 regular season games played.

But then something magical happened. Matthew started skating faster, his blades gliding across the ice a little more smoothly than the previous season. His battles against the boards, though still hard-hitting, were cleaner confrontations. And his disciplined play seemed to draw penalties against the opposing teams. Suddenly, Matthew Tkachuk started playing good hockey and making disciplined plays that helped his team more than getting suspended. He went from 105 penalty minutes in his first season to 61 minutes in his second season. He no longer had to rely on his grit to get him through the game because he was drawing penalties out of the other team, giving his own team the advantages on the ice, and playing good hockey while refining his own skills. With him on the ice instead of on suspension, Tkachuk made more of an impact on goals as well. In his truculent first season, he notched 13 goals. By the end of his second season, in 68 games, Matthew earned 24 goals. At the beginning of the 2018-2019 season, Tkachuk skated out on the ice with the letter A on his jersey that solidified his leadership on the team. Things were starting to look better for the young player.

Once you get a reputation in hockey, it tends to stick with you for years to come. Case in point, Matthew Tkachuk’s “friendship tour.” The opposition knows that Matthew is a threat in front of their net, but, unbeknownst to them, it’s not for the same reasons as in the beginning. In the beginning, Matthew would use his physicality to make a statement. Now, he uses skill and natural talent that he inherited from his dad. Is he the same player as Keith Tkachuk? No. But there are moments when I’m taken back to the past when Keith was the captain of the St. Louis Blues and making his own statement. Matthew is following in Keith’s footsteps in that he is making his own personal statement. And Flames fans seem to be on board. Matthew is earning more and more respect from fans as the month’s progress with his own path in the hockey world.

Matthew Tkachuk became the fourth @NHLFlames player to reach 20 goals, marking the second time in franchise history four players have scored as many goals through 45 GP.

Matthew has played in 45 games so far this season and already has a career high of 51 points. He’s earned 20 goals and 31 assists in those 45 games with the Flames and he doesn’t seem to be slowing down anytime soon. Teams know that leaving Tkachuk alone around their net is a bad idea. They won’t leave him alone based on what they know he is capable of. And he has gained a discipline that still gets in the heads of his opponents and draws penalties. And he’s not even smug about it. The look on his face during those plays tell me that it’s all in a day’s work to him, he’s just doing his job.

So what does the future hold for Matthew Tkachuk? Well, nothing is ever written in stone since Wayne Gretzky was traded out of Edmonton to establish hockey in California, but some things are more obvious than others and, I think, Matthew’s future with the Calgary Flames looks bright. He learned to keep his elbows down, he learned to not engage in every fight he is invited to, and he learned to control his stick. His disciplined plays have earned him his place on the team. This is not even close to being the end of the Matthew Tkachuk story. In actuality, this story has just begun for the 21-year-old and the future looks promising. 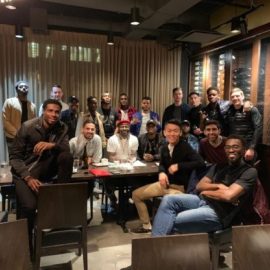