St. Louis is trending in the direction of a full-on rebuild. The team is now on its third head coach in three years, with Craig Berube helming the team after the firings of Ken Hitchcock in February of 2017 and Mike Yeo earlier this season.

Ironically, the Oilers are rolling since the hiring of Ken Hitchcock as bench boss. Since replacing erstwhile head coach Todd McLellan on November 20th, the team sports an 8-2-2 record and looks to be playing some of it’s best hockey since the 2016/2017 season. Hitch’s no-nonsense approach has seemed to spark the Oilers, who now stand at 17-12-3 on the season. However, this is a team that, frankly, looked horrible on the ice prior to Hitchcock’s tenure as coach. Despite their recent string of play, the team is still in need of a few pieces to truly push them over the hump into not only a consistent playoff team, but Stanley Cup contenders.

Said: “A COUPLE of general managers around the league have said that they’re HEARING the big names are on the block, everything is open, even Vladimir Tarasenko. A GM said, ‘I HEARD Vladi is available.’”

Not said: “The Blues have informed teams that all players are available.”

Recently, rumours have churned that the Blues are open to making moves including their star players. While the rumours have been disputed by hockey insiders, it does seem clear that the Blues have to retool sooner rather than later; sporting an 11-14-4 record at the time of this writing, the team looks poised to miss the playoffs for the second straight season after making the playoffs seven seasons in a row. With the Blues looking to shake things up, should the Oilers be looking to capitalize? Is there a trade to be made between the two organizations?

While there are certainly a few players that I’m sure both fans and the organization alike would love to acquire - hello, Colton Parayko! - there’s one name that truly could be difference-maker in Edmonton.

Vladimir Tarasenko is a name that Oilers fans have dreamt about for years. Since debuting for St. Louis during the 2012/2013 season, the Russian sniper has proven to be one of the most consistent goal scorers in the NHL. Generally, teams would cling for dear life to a player like Tarasenko, but with the rumours that the Blues are looking to rebuild and that any player in the organization is available, teams would be stupid not to be calling the organization about their star winger. While a hefty price would be required to pry him out of St. Louis, it’s not unfeasible that we could potentially see him moved prior to the end of the season.

The Oilers are still a team on the outside looking in, despite their strong play as of late. While Ken Hitchcock has managed to reverse the team’s spiral down the standings since his hiring, it’s still apparent that the team is at least a few pieces away from consistently challenging for the playoffs, nonetheless the Stanley Cup.

As a team looking to rebuild, the Blues will be looking for assets that will make them competitive in a few years time, not immediately. While Draisaitl is already arguably a superstar in his own right, his young age and contract length would both be attractive to a St. Louis squad looking to lock down long-term assets.

Since his NHL debut in 2012, Vladimir Tarasenko has established himself as one of the premier snipers in the league. In his seven seasons in St. Louis, the 27-year-old has scored an average of .42 goals per game, placing him 8th among players with at least 300 games played in the same time-frame. Only names like Alex Ovechkin, Steven Stamkos, and Sidney Crosby - all marquee names in their own rights - out-pace Tarasenko, proving that the Russian is a true-blue superstar in the league. In the past four seasons, Tarasekno has scored no less than 33 goals.

While primarily known as a goal-scorer, his 183 assists prove that the winger possesses a ton of playmaking ability as well. Factor in his 6’0, 225-pound frame and Tarasenko proves to be a multi-dimensional forward with a penchant for goals. With a contract lasting another four seasons after this with an AAV of 7.5 million dollars, Tarasenko represents reasonable “bang for your buck” when looking for a premier scorer.

“Vladimir is very effective around the net with his excellent overall skill level and vision. He is a strong, mobile skater with a quick shot. He is not only a sniper, but also a good passer and playmaker. There are no real weaknesses in his overall game.” - Göran Stubb, NHL Director of Central Scouting

Leon Draisaitl, while equally talented, is a different style of player compared to Tarasenko. At only 23, the young German is developing into a dominant player in his own right. While not as much of a goal scorer as his St. Louis counterpart, he’s got incredible playmaking ability, complimented by outstanding vision on the ice. While playing the majority of his time with Connor McDavid is sure to be a boon to his production, the 6’2 forward is able to seamlessly switch between the centre and right wing positions, giving the Oilers a dynamic they haven’t had since Mark Messier plied his trade here. While still developing, the German is already a large part of the Oilers offence, a role many expect will only grow as he matures as a player. In 2017, Draisaitl signed an 8-year, $68 million dollar contract with an AAV of 8.5 million.

“Leon Draisaitl is a big bodied centre that willingly and consistently disrupts the tempo of a hockey game with his uncanny patience and his intelligent possessive style. He loves to fly through the middle of the ice, often dazzling with his Datsyuk-like puck handling skills. Leon’s vision and ability to lay claim to space in the dirty areas of the ice make him an elite offensive threat. He plays a pass first style but also has a goal scorers shot with the smarts to look off a pass or quickly change his shooting angle to get it past the goalie. Draisaitl has the hockey sense and skill to be a premier NHLplaymakerr, but he will need to round out his skating while striving to be more of a difference-maker in the defensive zone to reach his highest potential.” - Zenon Herasymiuk – Future Considerations

Vladimir Tarasenko is one of the premier snipers in the game, full stop. It’s hard not to salivate at the prospect of a McDavid/Tarasenko pairing; with Tarasenko’s shoot-first mentality and McDavid’s otherworldly ability to make plays, it’s difficult to imagine the ceiling the pair could hit. Is it outlandish to imagine the Russian sniper hitting the 50-goal mark alongside McJesus? Frankly, it’s difficult not to. Yes, Draisaitl has proven to be a more-than-adequate running mate for McDavid, but at this point, that’s all he’s proven to be. Unfortunately, he hasn’t proven he’s capable of carrying his own line night in, night out, which is a genuine red flag for this writer. One major reason we were given for Draisaitl’s high AAV was his ability to centre his own line; however, he’s hardly been given that chance this season and when he has, he hasn’t excelled.

A second-if-underappreciated benefit of the move would be cap relief. There’s no point in delving into the cap hell that is the Edmonton Oilers contract situation; despite the fact the league is due to increase the salary cap this off-season, the Oilers still find themselves tied to a few egregious contracts in the forms of Milan Lucic, Kris Russell and Andrej Sekera. The trio combines for a cap hit of $15.5 million dollars per season, a number worth nearly 19% of the team’s total salary cap. All three also come with various NMC/NTC’s of their own, making them nearly unmovable for the duration of their contracts. It’s unfortunate, but the Oilers will need to maximize their amount of available cap space for the future in order to ensure the team is successful for future seasons. While the savings may be minimal, it provides a cushion that Edmonton otherwise wouldn’t have.

There’s very real potential the Oilers could lose this trade.

Leon Draisaitl is one of the brightest young stars in the game today. At only 23 years old, he’s already posted seasons of 77 and 70 points and looks to be on pace for his highest-scoring season this year. He’s a unique asset, too; it’s rare to find someone with a 6’2 frame that’s as silky as Draisaitl. His vision with the puck is outstanding, and he’s already established as one of the premier playmakers in the game today.

Most importantly, he’s a known asset. While there are definitely aspects of his game left to be desired, how does the old saying go? “It’s better the devil you know than the devil you don’t.” While I’d have absolutely no fear of a Tarasenko regression - at least not for a few years - Draisaitl is firmly entrenched as an up-and-coming star. Could the Oilers potentially be losing out on a second 100-point player should they move Draisaitl? Absolutely.

Additionally, the Oilers would certainly be losing out on their new-found depth at centre. Despite Draisaitl’s inconsistency on his own line, his ability to play the centre position gives the Oilers a ton of flexibility in their top-six. Between Draisaitl, McDavid and Ryan Nugent-Hopkins, the Oilers finally have depth at centre that they’ve been lacking since the glory days of the mid-’80s. While Draisaitl’s primarily playing at the RW regardless, moving him out for a pure winger definitely removes some flexibility within the Oilers forward group.

So Would You Do It?

Look, guys - losing Draisaitl will hurt a ton, and perhaps even more than this writer is even willing to concede at this point. However, if the Oilers were given the opportunity for a premier sniper to play alongside Connor McDavid for the next four years, they’d be silly not to take it. Vladimir Tarasenko is the top-flight winger the Oilers need. In addition, the Oilers likely wouldn’t need to give anything up on top of Draisaitl to make the trade work, which doesn’t deplete your assets elsewhere.

What do you think, Oilers fans? Does a move involving Tarasenko and Leon Draisaitl work?

Major Moves: A Look at a Potential Draisaitl/Tarasenko Trade 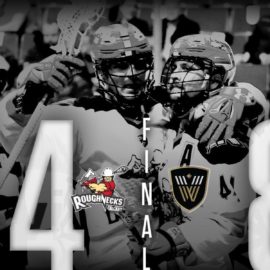