It’s been an excellent-if-unexpected start to the season for Edmonton Oilers netminder Mikko Koskinen. The 30-year-old Finnish goaltender sports an 8-3-1 record in his 13 appearances thus far with the Oilers, including two shutouts. His .925 save percentage is good for 6th in the NHL among goalies with 10 or more starts, and his play has been a bright spot for an improving Oilers squad. Few - including this writer - expected this level of play out of the former New York Islanders goaltender, even on a temporary basis. With Cam Talbot struggling until recently, Koskinen has been relied upon to be the Oilers de facto starting goaltender this season, despite no official designation from either Todd McLellan or recently-hired Ken Hitchcock.

While it’s hard not to get excited about the Fins’ stellar play, the reality is we could simply be the beneficiaries of a hot string of games. It wasn’t long ago that Oilers fans thought that Jeff Drouin-Deslauriers was the goalie of the future, and I don’t think I have to remind anyone how that turned out. That isn’t to say that Koskinen is destined to falter eventually, but it’s worth keeping expectations tempered.

Is Mikko Koskinen for real? Or, are Oilers fans benefitting from a hot string of games and be preparing for the inevitable crash?

The Story on Mikko:

After two years in the Finnish Elite League with the now-defunct Espoo Blues, Mikko Koskinen was drafted by the New York Islanders with the 31st overall pick in the 2009 entry draft. Koskinen was ranked second amongst European goaltenders by Central Scouting in his draft year and came highly-touted for both his size and athletic ability. After being drafted, Koskinen made the jump across the pond and spent the 2009/2010 season with the Bridgeport Sound Tigers of the AHL.

Unfortunately, injuries plagued his early career. A hip injury interrupted his first season in North America that kept him off the ice from October - March, while a wrist injury ended his second year with the  Tigers in 2010/2011. While Koskinen made his NHL debut that season, it marked the beginning of the end of his first stint in North America. After two games in 2011/2012 with Bridgeport, Koskinen went back to the Finnish Elite League and led KalPa to a first-place finish in the regular season.

Building off his strong return, Koskinen experience far more success in Europe than he had in his inaugural run in the NHL. His two seasons for KalPa were nothing short of dominant; Koskinen sported a glowing 34-20-17 record in his time in Finland, coupled with a sparkling 2.17 GAA and .918 save percentage. His time in the KHL was even more productive; over his 184 games with Sibir Novosibirsk and SKA Saint Petersburg, Koskinen posted a  101-58-15 record. His 1.99 GAA and .926 save percentage are outstanding in any league, with last season’s .947 save percentage and 1.57 GAA the KHL’s standard-bearer.

On May 1, 2018, it was rumoured that Koskinen had signed to a one-year, 2.5 million dollar contract with the Oilers. Confirmation came on July 1, and we now find ourselves at the start of December with a bit of a goaltending controversy in Alberta’s capital city. While incumbent starting goalie Cam Talbot has struggled in the first half of the season, Koskinen has provided consistent, steady goaltending for the Oilers. At points, he’s been downright incredible; at home, Koskinen is 5-0 with a .967 save percentage at the time of writing, and sports an 8-3-1 record overall. Among goalies with 10 or more games played, he ranks 9th in save percentage (.925) and 5th in GAA (2.23). His hot start is one of the major reasons the Oilers are even in the playoff hunt but did the team sign the right backup goaltender? He’s still an unproven option and many Oilers fans - including myself - would have preferred the team sign a move proven backup goaltender at the time. With Peter Chiarelli’s track record signing players, could a better option have been available?

Obviously, Koskinen is a bit of a unique case when it comes to goaltenders. Few netminders currently in the NHL spent any time in the KHL, nonetheless the bulk of their careers. However, there are a number of goaltenders with similar numbers league-wide, both contract and stats-wise.

The best comparable we have to Koskinen is former Oilers goaltender and current Vancouver Canucks backup ‘tender Anders Nilsson. Their similarities in their early careers are remarkable; both were drafted by the New York Islanders in 2009, with Nilsson was selected just 31 picks after Koskinen at 62nd overall. Both also experienced disappointing starts to their North American careers, though Nilsson was much quicker to make it back across the Atlantic; in 2015, he signed with Edmonton after a successful stint in the KHL. After a hot run in the capital city while Cam Talbot faltered - sound familiar yet? - many were ready to anoint Nilsson the heir apparent to the starting goaltender role. However, Nilsson acts as the ultimate cautionary tale in this regard; while the Oilers weren’t guilty of going all-in on the Swedish goaltender, he serves as a stark reminder that riding the hot hand can be beneficial as long as you don’t get burned. In the 2017 offseason, Nilsson signed a two-year deal with the Canucks valued at 2.5 million/year, the same dollar value as Koskinen. While Nilsson was never an option this offseason, it’s interesting to note the similarities in the two careers.

Chad Johnson is a goalie Oilers fans will be familiar with; not because of any time the netminder has spent here, but for the lack of time he hasn’t. It seems as though every offseason at least a few Oilers fans will advocate for Johnson’s services as a backup goaltender, yet Edmonton has always gone a different route. Johnson is in his 9th season in the NHL, and he’s firmly entrenched as a middle-of-the-road goaltender. Over his career, he’s posted a record of 80-67-15 with a 2.69 and .909 save percentage. After signing a one year, 1.75 million dollar contract with the St. Louis Blues this offseason, Johnson’s been, well, bad. His 2-7-0 record has the Blues tied for worst in the Western Conference, and it appears as though the Oilers dodged a bullet by choosing Koskinen over Johnson.

Current Dallas Stars netminder Anton Khudobin was another name pegged to replace Laurent Broissoit as the Oilers backup ‘tender this offseason before the organization’s signing of Koskinen. The 32-year-old has played parts of ten seasons throughout his journeyman career and signed a two-year deal, 2.5 million dollar contract with the Stars on July 1st. He’s had an incredibly average start to his tenure in Texas, with Koskinen outperforming him in nearly every statistical category. The only conceivable advantage that Khudobin currently holds is a slightly longer track record in the NHL. However, if the former 7th-round pick of the Minnesota Wild was ever in consideration for the Oilers backup position, it appears as though the Oilers made the right decision in not signing him.

A native of Airdrie, Alberta, Aaron Dell signed a two-year contract this offseason for 1.9 million per season. At 29, Dell represents the youngest goaltender on this list, albeit only by a few months. Other than Koskinen, he’s also played the least NHL games with a paltry 58 to his name. However, in his small sample size, Dell has impressed. While he may sport a 3-4-2 record thus far this season, his career record of 29-15-7 paints a far better picture of his potential. Much like Koskinen, signing Dell would have meant gambling on potential, but it appears as though he may not have been a bad gamble.

So What’s the Verdict?

Many thought that the Koskinen signing was a head-scratcher, and rightfully so. Even compared to the names listed above, Koskinen was an enigma in net. Oilers fans - and to some extent I’m sure, Oilers management - wasn’t exactly sure what they were getting, and a lot of the hesitation in the signing came due to the fact that there were more experienced options available.

However, it appears thus far that Peter Chiarelli’s gamble has paid off. When compared to a few of the goaltenders available this offseason, Koskinen is heads-and-tails above the rest. To this point in the season, he’s been the difference between a potential playoff spot and failure; while any of the other goaltenders may have been put in the same position by the Oilers should they have signed here, who knows where the team would stand without Koskinen?

It’s rare you can give credit to Chia, but give it when it’s due - to this point, it’s hard to debate the Koskinen signing as anything but a win. 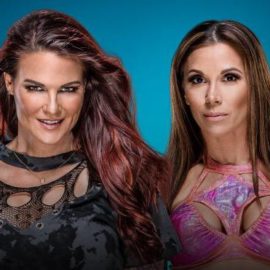 BREAKING: Lita to Return at Evolution to Face Mickie James