One night before Money in the Bank, NXT takes over Chicago for the second time. As we’ve come to expect with WWE’s third brand, it’s an outstanding card full of well-built matches. There’s only five scheduled bouts on the card, so each should get a ton of time. With the quality of the individuals involved, it should be a hell of an event.

Conspicuously absent from the match card is the North American Championship, as well as Adam Cole in any capacity. I’m certain that this means he’ll have nothing to do with the tag team match.

Saturday will see the singes debut of the man known as Ricochet, as he takes on the Velveteen Dream in what’s likely the most talked about match entering TakeOver: Chicago.

It’s a testament to the depth of NXT that these two men aren’t in the main event of the evening. Both Ricochet and Dream have arguably been the MVP’s of the brand over the past few months; since the seeds were planted for their feud at TakeOver: New Orleans, the two have torn down the house show circuit, and while I’m not usually a fan of feuds developing on Twitter, the two have been hitting each other with low blow after low blow for weeks. There’s a ton of heat behind both men heading into Chicago, both in-ring and storyline wise.

It’s clear that both men are destined for big things in the near future; however, while there’s every reason for Dream to win - he’s a personal favourite and due for a statement victory - he’s the type of character that wins and losses truly don’t affect at this point. While Ricochet may be in the same position, the former Prince Puma won’t lose in his TakeOver singles debut. Prediction: Ricochet

Kyle O’Reilly Day is widely celebrated throughout Canada, as it should be.

Saturday will see Danny Burch and Oney Lorcan challenge for their first gold on the NXT roster as they take on Roderick Strong and Kyle O’Reilly for the NXT Tag Team Championships.

Since Strong’s turn at TakeOver: NOLA, both he and the other members of the Undisputed Era have been a thorn in the sides of Pete Dunne and the team of Burch & Lorcan. While never previously aligned with the United Kingdom Championship, the two have come to his rescue a number of times, including as part of a six-man tag team match on NXT that lead to their title opportunity. The two are fantastic wrestlers; however, the UE is the hottest stable in WWE at the moment, and all a loss would do is derail their momentum. Expect Adam Cole to be heavily involved in this one, with Undisputed Era leaving with their arms raised. Prediction: Undisputed Era

Saturday night will finally see Nikki Cross get her shot at the NXT Women’s Championship as she takes on Shayna Baszler.

It was surprising to me when SAniTy was called up without Cross; while I’m a huge fan of the faction, Nikki has likely been the MVP of the group since their debut over a year ago. Her unhinged style in the ring coupled with her unique character has made her a highlight of the third brand since her debut; however, she’s remained behind as her stablemates move up to Smackdown Live to earn her shot at the top prize for NXT’s women’s division. While Cross is a personal favourite and I’d love her to win, Baszler has simply been built too dominantly to have her lose now. Expect her to retain tonight. Prediction: Shayna Baszler

Saturday night will see the likely conclusion in one of the greatest stories WWE has ever told, as Johnny Gargano and Tommaso Ciampa face off in a Chicago Street Fight in the city where their story began.

It’s not a hyperbole to say that Gargano vs. Ciampa is the greatest story in NXT history. If not for Omega/Okada, this would be the hands-down winner of Feud of the Year, and likely would still be my personal pick. Seriously, everyone: if you haven’t taken the time to familiarize yourself with their story, you’re missing out. Their last match was a five star classic, the second such match in Gargano’s time with WWE. Ciampa has become one of the top heels in the world, relentlessly booed throughout the WWE Universe with a ferocity not seen since the 70’s. Seriously, it’s been that good.

Storyline wise, it’s easy to justify a win for both men. However, while Ciampa’s character was able to take one loss, I can’t see him taking another - especially in a match with the potential to be as vicious as a street fight. Prediction: Tommaso Ciampa

Aleister Black defends the NXT Championship for the first time on Saturday as he battles the monstrous Lars Sullivan in Chicago’s main event.

More than a few fans raised their eyebrows when Sullivan answers Black’s call for a challenger on the May 30th edition of NXT. While a formidable physical presence, the Freak isn’t quite as experience in-ring as some of the other NXT roster members, and I’m sure I wasn’t the only one who had expected a more seasoned opponent for the champion at TakeOver: Chicago. However, Sullivan has performed admirably in the main-event scene, laying out Black with multiple Freak Accident’s last week after catching a Black Mass mid-kick the week prior. While I don’t expect Sullivan to win on Saturday, he’s certainly been elevated as a talent from this feud. Prediction: Aleister Black

That’s it, that’s all wrestling fans! Are you watching tonight’s event? Don’t forget - your hosts of Over the Top Rope will be live on Periscope following TakeOver tonight; make sure to tune in! 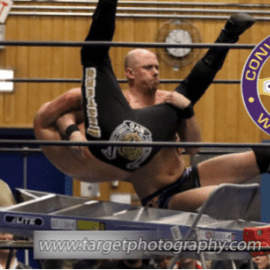