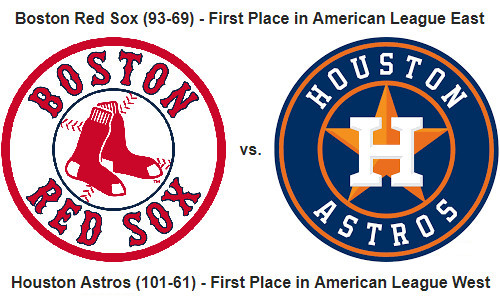 The Wild Card games are in the books, and the American League Division Series (ALDS)  MLB playoff match-ups have been set. In this preview we will look at the Red Sox versus Astros. A 101 win Houston team is more closely matched up with a 93 win Boston team than what you would expect. Let’s investigate!

Chris Sale and Drew Pomeranz look to face off against Justin Verlander and Dallas Keuchel in game one and game two respectively.

Sale is 5-1 with a 1.31 ERA lifetime against Houston. Verlander is 5-0 with 1.06 ERA since being traded to Houston from Detroit. Talk about a marquee match-up.

Keuchel, a previous Cy Young winner and two time All-star who went 14-5 this season goes up against 17-game winner Pomeranz, who had a bounce back year.

However, beyond the 1-2 punch provided by both teams, the Red Sox surprisingly might have the edge in starting pitching, if they go with Doug Fister to oppose Houston’s likely starter in Brad Peacock.

In the Bullpen, the Red Sox have been solid most of the year and got even better and deeper with the additions of Addison Reed, Carson Smith and Austin Maddox. Maddox, since rosters expanded has been literally lights out. In 13 appearances, over 17.1 innings, has allowed one earned run, 14-strikeouts and sports a 0.52 ERA.

The addition of David Price, who can pitch to either lefties or righties, has opposing hitters batting a paltry .100 with 13-strikeouts, allowing zero runs over 8-innings of relief in September. He adds a dynamic arm, coupled with an elite closer in Craig Kimbrel sporting a 1.43 ERA, could favor the Sox.

This doesn’t mean to discount Houston’s bullpen. Chris Devenski, Will Harris and closer Ken Giles who all have ERA’s under 3.00 and combined for 44 Holds and 40 Saves.

The Astros lineup is solid, anchored by Carlos Correa and the aforementioned Altuve in the 3rd and 4th spot with added punch provided by center-fielder George Springer and his 34 jacks.

The Red Sox do score runs, but by manufacturing them. They were 10th in run production but 27th in the long-ball category. Like the Astros, the Sox are led by their young core offensively starting with Mookie Betts who led the team in runs (101), HR (24) and RBI (102) and Andrew Benintendi who joined Betts in the 20/20 club this year.

Speaking of running, the Red Sox hold an edge in stolen bases with a 106 thefts on the year to Houston’s 98 and will need to keep that aggressive mindset to put pressure on Houston, who like Boston was in the top half of the league in committing errors. On the flip side, the Red Sox were 2nd in the league in stolen base percentage allowing only 61, where as Houston allowed over 100.

Defensively, the Sox might have the best outfield trifecta in baseball with Betts, Benintendi and Jackie Bradley, Jr., but the Astros own the infield match-up, especially at the corners with third baseman Alex Bregman and first baseman Yuli Gurriel as Boston’s Rafael Devers has struggled at third.

I think the series will go five. If the series is to go the distance, they will have played nine consecutive games, counting the four the ended the season with. The closest we may ever get to the old-time 9-game World Series format, last played in 1921.

The Red Sox will need to play on all cylinders to have a chance. David Price could be a trick up Farrell’s sleeve. However, with the status of Eduardo Núñez unknown, It will be important for veterans Dustin Pedroia and Hanley Ramirez to contribute offensively to put pressure on the Astros.

They say pitching wins series, but managing the pitching in high leverage situations has been John Farrell‘s downfall.  In the end, I give the nod to the Houston Astros as I think their high powered offense will be the difference. The Astros will meet the defending AL Champion Cleveland Indians in the ALCS.

One thought on “MLB Playoffs - Red Sox Versus Astros”