EDMONTON, AB: The King of Dong Style is heading north.

This morning, Real Canadian Wrestling announced that independent wrestling star Joey Ryan will make his RCW debut at the promotion’s Final Stand 3 event on October 18th in Calgary. Ryan will also join the RCW roster for the following evening’s Rise of Legends show in Edmonton.

Throughout his nearly 20-year wrestling career, Ryan has established himself as a lynchpin of the worldwide independent wrestling scene. In-ring, Ryan’s style can be described as, well, unique, but there’s no doubt whatsoever that the former World’s Cutest Tag Team star is one of the most entertaining wrestlers in the world today. Iconic championship runs with the Ironman Heavymetalweight Championship and surprise appearances like that of last year’s All In have truly solidified Ryan as an indie wrestling superstar. Ryan’s influence is palpable outside of the squared circle, too, both as one of the founders of Pro Wrestling Guerrilla and a staunch advocate for independent wrestlers rights.

No opponents for Ryan’s Alberta run have been announced.

Tickets for both of Ryan’s appearances in Alberta are currently on sale through myshowpass.com, or at any of RCW’s upcoming live events. 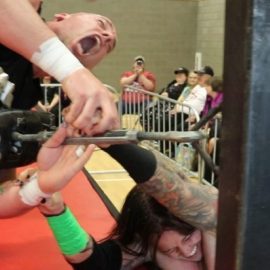