Week 3 of the NFL preseason has come and gone, and we are another week closer to the games finally beginning to mean something. Week 3 is usually looked at as a dress rehearsal for the starters with them getting more playing time before the regular season.

Here are my 5 takeaways from Week 3 of the NFL preseason:

1. The Eagles have Quarterback issues

Last week I talked about how the Eagles may be in quarterback trouble after Nick Foles sustained a shoulder strain injury with the team awaiting the return of Carson Wentz. This week the same worry is clouding over Philadelphia but for a different reason.

The Eagles lost to the Cleveland Browns on Thursday night by a score of 5-0. You read that right. 5-0. Nick Foles started the game showing no issue in the shoulder, but he did however, suffer a poor performance. A very poor performance.

That doesn’t get Foles off the hook however, as his preseason performance up to this point has been nothing short of sub-par. The team has a serious issue heading into Week 1 of the regular season with Foles looking this poor and Wentz looking like it will still be some time before he is cleared for contact.

The Eagles starting offence has yet to score a touchdown in the preseason and while Foles isn’t the sole reason for that his poor play hasn’t helped.

There are a few QB’s out there the team could look at as insurance policies should they not feel confident in the options they have. One thing is for sure, all eyes will be on the defending champs in the first few weeks seeing how they handle it all.

2. The Chiefs have an explosive offence

When the Chiefs traded Alex Smith to Washington this past offseason I was a little shocked at just how much faith Head Coach Andy Reid was putting in the young second year QB Patrick Mahomes.

I have been skeptical of how well the young signal-caller is going to do in his sophomore season but so far through three preseason games he has been proving me wrong. Mahomes has thrown for 367 yards in limited time through three games.

He’s also completed 72.1% of his passes and has thrown 2 touchdowns to 1 interception. But it’s not the numbers that are most impressive. It’s his play-making ability.

It also hasn’t just been the play of Mahomes that has people buzzing about the Chiefs offence as receiver Tyreek Hill has 182 yards on 14 catches in three games. The two have been connecting on big plays all preseason.

Whether it was the 69-yard touchdown bomb in Week 2 against the Falcons with 22 seconds left in the first half or Mahomes avoiding pressure to hit Hill for a first down gain against the Bears this past week the Chiefs offence looks like it could be even more explosive than it was to start the year last year.

If Mahomes can make some of the big plays he has in the preseason on a consistent basis in the regular season look out!

Early indications out of Bills camp was that Josh Allen was looking like he was ready to be the Week 1 starter come September. With AJ McCarron missing time with a sore shoulder all signs pointed to Allen having the upper-hand on the QB battle.

Allen so far through three games has completed 54.5% of his passes for 210 yards and 2TD’s with no interceptions and has shown the ability to make plays like the beautiful touchdown pass on the goal-line to Rod Streater where he avoided pressure from a Browns defender in Week 2.

Give me an IV of this.

On this play Josh Allen:

-Stands tall in the pocket
-Keeps his eyes up with pressure around him
-Accurate on an off balance throw#Bills pic.twitter.com/gGTSgHWs58

Despite his ability to avoid pressure and make a big play or two I still don’t see Allen as being ready. This past week against the Bengals Allen looked lost under-throwing receivers and being off target, while being sacked 5 times and making questionable decisions. He also missed some time in the game after bouncing his head off the turf on a sack in the second quarter.

Geno Atkins drives Ducasse back into Josh Allen, Carl Lawson finishes it with the sack. Fun pass-rushing duo for the Bengals to have. pic.twitter.com/FaDVfIZzaF

Add to that the Bills have gotten the best performance at QB out of Nathan Peterman who has completed 80.5% of his passes for 431 yards and 3TD’s and I don’t see any need to rush Allen into the starting role despite how hungry Bills fans may be for the franchise pivot they’ve desired for years.

4. The Ravens should move Joe Flacco

The Ravens need to stop playing games and move on from Joe Flacco. As a team wanting to win in GM Ozzie Newsome’s last year before he retires I understand the idea of playing the year out with the veteran QB under centre while rookie Lamar Jackson develops.

But Jackson looks good and ready now. His completion percentage isn’t very good at just 47.2% but he’s making plays both through the air and on the ground. He’s thrown for 299 yards and 3TD’s while rushing for 111 yards averaging 5 yards per carry.

.@Lj_era8 getting it done on his own ⚡️ (via @NFL)pic.twitter.com/AlLDlRD25U

Add to all this to the fact that Robert Griffin III has found some success this preseason throwing for 243 yards while completing 65.9% of his passes with 2TD’s and 1INT and rushing for 52 yards.

It’s not just the success of RG3 for me that spells the end for Flacco but combine it with the fact that the former Baylor star plays the same style as Jackson with his mobility gives him the upper hand over a slower, non-mobile Flacco.

I understand the idea of wanting to win for your retiring GM, but I believe you cannot ignore what Jackson has been bringing to the field so far and it would be a shame to see Griffin let go when it’s clear he has a spot on the roster.

I’ve never been a huge believer in Flacco as a franchise QB and feel like the Ravens might as well try and trade the vet and get something in return while turning to the future that appears to be here right in front of them.

The Arizona Cardinals defence has quietly been playing like it’s Week 8 of the regular season with their preseason dominance. Through three games the Cards D has held every opponent to under 20 points.

Add to that the sheer dominance in the turnover column and this group looks very scary. The Cardinals defence has forced 16 turnovers and totalled 13 sacks so far in the preseason. They had an absolute controlling game over the Cowboys in Week 3 with 8 takeaways and 5 sacks.

They have been giving up a large number of yards but it is the preseason so you can chalk some of that up to back ups playing the majority of the first two games. They gave up 269 yards to the Cowboys but did not allow them to get into the end zone holding them to 3 points the entire game.

If this sample sized performance is something Arizona will carry into the regular season the NFC West is going to have its hands full with this defence in every matchup and could make a transition to a young QB like Josh Rosen that much easier.

Those are my 5 takeaways from Week 3 of the NFL preseason and we are that much closer to the games starting to mean something. The preseason wraps up Thursday night before teams are required to trim the rosters down from 90 to 53 on Saturday September 1st.

Are you ready for some football? 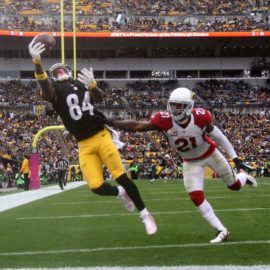