An Albertan superstar is heading to the United Kingdom, a number one contenders match was made for the Alberta Championship, the Renegade Memorial tournament has it’s first match, and a lack of furniture destruction headlined the past week across the province’s professional wrestling scene. Want to get up-to-date on the latest across Alberta?

It’s the latest edition of Last Week in Alberta Wrestling, your weekly source for the past seven days in the province’s pro wrestling!

One of Canada’s top talent’s is heading across the pond.

In a Facebook post yesterday, “God’s Gift to Wrestling” Michael Richard Blais confirmed that this week he would be heading to the United Kingdom to make his debut for the World Association of Wrestling. The WAW, run by the legendary Knight family, is perhaps best known as the home promotion of WWE Superstar Paige. Earlier this year, the promotion was prominently featured as part of the film Fighting with my Family.

“(I’m) looking forward to this opportunity to work with the legendary Knight family & compete with the very best stars of the World Association of Wrestling,” said Blais in his aformentioned release. “All while showing that I am BETTER THAN THE BEST to a whole new country! (It’s) gonna be a good summer! I. DO. NOT. DISAPPOINT!”

Visit the WCSN for a full recap of yesterday’s announcement.

It was confirmed this week that Jack Pride will face off with Travis Cole in Red Deer this Saturday in a #1 Contenders match for the RCW Alberta Championship. In a video released by the Canadian Wrestling Coalition, Commissioner Irishman declared that the two would square off at the upcoming RCW/CWC show From the Ashes for the right to challenge for the title, currently held by Dylon Stone.

The pair have both been red-hot as of late, with Pride coming off yet another acclaimed match with Michael Richard Blais at the last joint RCW/CWC show. Cole, on the other hand, has not only been feuding with the multi-person stable of Dirty Inc, but successfully keeping them at bay, putting on one of the most talked-about matches in recent memory when he faced off with Maverick Jack last month in Red Deer. Now, with the number one contendership on the line, one hot streak will fall.

In a show based around the randomness of it’s matches, perhaps the most surprising part of RCW Dealer’s Choice was the complete absence of a main event. While the evening was supposed to feature an advertised TLC match between Brice “The Slammer” Sova and RCW Canadian Heavyweight Champion Heavy Metal, the match itself was called off following Metal’s claim that “Edmonton wrestling fans don’t deserve pro wrestling.” Fortunately, that didn’t mean fans in the capital region were sent home unhappy, with the Slammer taking umbrage with both Metal’s words and the champion himself. Following the evening’s final match between Angelica and Kayla Jaye, the Slammer dragged Heavy Metal to the ring and commenced with a ruthless beating, putting the champion through a table and assuring the RCW crowd that the advertised Tables, Ladders and Chairs match would purportedly take place on August 10th.

Massive Damage and Wrath were looking to make a statement at Monster Pro Wrestling’s most recent show; however, even considering their sizable appetites for destruction in MPW, the pair may have bitten off more than they can chew.

As mentioned in our latest recap from Monster Pro Wrestling, the duo known as the Tattoo Terminators certainly made their presence’s known throughout the evening of July 6. In interrupting three of the evening’s six matches, the pairing made it clear that they were out for blood. Both Damage and Wrath were suspended until the Renegade Memorial Tag Team Tournament initially; however, following interference in the evening’s main event of Headline Shaun Martens vs. Lumberjack Larry Woods, MPW’s new head honcho Commissioner Jimmi Zero made the announcement that the Tattoo Terminators will face off with the team of Larry Woods and Mitch Clarke in next month’s tourney. What’s more, should the Terminators lose, Massive Damage would be fired.

It was a shocking development for the long-time MPW star; will both he and Wrath be able to pull out a victory over last year’s Leo Burke Cup winners? Or, will he find himself in the back of the unemployment line? 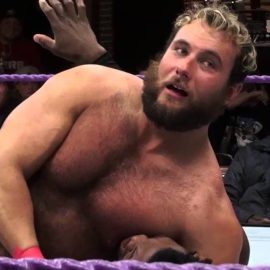