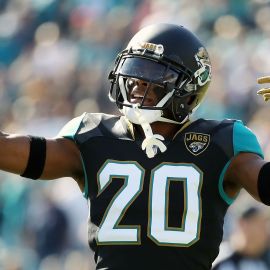 The 2018 NFL Fantasy Football season is closing in on us. Throughout the next eight weeks, we’ll be going through all the fantasy options for teams by division. This is the fourth installment and we’ll be going over the AFC South which is a division that with the addition of Andrew Luck back under center for the Colts got a lot more competitive for second place as well. Jacksonville is without a doubt the best team in this division and should win the division easily.

The Indianapolis Colts come into the 2018 season after an abysmal 2017 campaign which saw them go 4-12 after star QB Andrew Luck couldn’t play all season. After buffing up their offensive line through free agency, they’ll look to keep Andrew Luck upright and hope he can lead them back to the postseason.

QB: Andrew Luck is a quarterback in fantasy football this year that I’m avoiding like the plague personally. I get a lot of flak for hedging expectations on Andrew Luck despite him on suiting up for 22 games in the past 3 seasons. If Andrew Luck is healthy he’s one of the best quarterbacks in the game, but for a QB with injury problems and that hasn’t played under center for a calendar year. It’s hard for me to risk my fantasy season on Luck when the QB position this season is so deep for Fantasy Football. Andrew Luck is a high risk, high reward fantasy option this season.

RB: I hope this is the year the Colts finally give Marlon Mack the ball and let him run with it. He’s an explosive playmaker that would be an amazing fantasy option if he got the volume. Frank Gore is no longer on the Colts, so as it looks right now it’s Marlon Mack’s position to lose. Robert Turbin the touchdown vulture himself is currently serving a four-game suspension and won’t have an impact in many fantasy drafts. It’s worth noting the Nyheim Hines was the fastest running back in the draft and has explosive playmaking potential as well, as of right now Mack is #1 on the depth chart though.

WR: The Colts WR’s fantasy relevancy will drastically change whether Andrew Luck is under center or not. T.Y Hilton is always going to be relevant but for the Colts to have more than one viable option at WR they’ll need Andrew Luck to have a good season. Ryan Grant doesn’t excite me as anything more than a WR3 and Chester Rogers should be nothing more than a potential streaming option.

TE: I have absolutely no faith in Eric Ebron as a fantasy tight end option despite him finishing 13th last season, he has a reputation for dropping the ball and quite frankly I think he just has bricks for hands. I don’t know why the Colts brought him in, to be honest, Jack Doyle is a fantastic tight end and finished 7th in fantasy scoring. Ebron might take away some of his production, but I still expect Doyle to finish top 10 this season.

Defense: The Colts have added some talent to their defense but for a defense that finished 28th in fantasy scoring last year they simply aren’t worth rostering.

The Tennessee Titans are coming off a 2017 season which saw them make the playoffs, beating Kansas City in the Wild Card round before losing to eventual Super Bowl attendee New England. I personally believe that was a one-off and this division gets a lot harder with Andrew Luck and Deshaun Watson both playing full seasons.

QB: Marcus Mariota drives this Tennessee offense both through the air and on the ground with his legs. He’s yet to really break through as a consistent fantasy option as he has yet to finish a season better than QB13. Mariota will always have a reliable floor as a fantasy QB due to his ability to create plays with his legs, therefore, will always be a good streaming option.

RB: DeMarco Murray has officially retired from the NFL opening the door for third-year running back Derrick Henry to endure a lot of the workload. I must admit I’m extremely excited to see what Derrick Henry can do with more volume. Henry should get most of the goal-line carries and early down workload as he isn’t very good in the passing game, nor does he have to be with Dion Lewis on the roster. Both Henry and Lewis should have decent fantasy value.

WR: Rishard Matthews is starting training camp on the PUP list after it surfaced he was injured about two months ago, surprisingly we don’t know much about the injury or the timeline of his return as the Titans haven’t given much information. Second-year player Corey Davis should be one of the candidates for breakout player of the year. One of the highly touted offensive playmakers of the 2017 draft where he was selected fifth overall. The depth chart has opened for him and will look to take on a big role in 2018 after missing five games due to injury in 2017. The only other Titans WR that might be worth a late-round flier on is Taywan Taylor as he’s been lining up outside all training camp.

TE: Delanie Walker doesn’t get the credit for his production as he probably deserves, finishing top five in fantasy scoring for the third straight year. A new offense and him being 33 might slow down his production a little bit, but he’s a reliable tight end that should finish top 10 in Tight End scoring regardless.

Defense: The Titans defense finished 16th in fantasy scoring last season and despite losing Avery Williamson in free agency, they managed to add Malcolm Butler and drafted Rashaan Evans and Harold Landry. Expect this defense to make big plays and take a step forward in 2018.

Additions: Nobody of note.

Houston looked like they had something going with Deshaun Watson under center but after going down with a season-ending injury managed to finish the season at 4-12. If Deshaun Watson can stay healthy look for the Texans to compete for second place in this division, they are a team that should take a huge step forward if they can remain healthy.

QB: Deshaun Watson. Despite only playing in six games due to tearing his ACL before Week 9 Watson finished the 2017 season as an All-Rookie as he threw for 21 TD’s in 26 quarters of football and finished top-two in fantasy scoring for four straight weeks. I’m tempering expectations on a QB that I think has below average efficiency and was on an unsustainable tear in 2017. However, he comes into 2018 as one of the QBs with the highest ceilings.

RB: D’Onta Foreman is expected to take the starting job over Lamar Miller at some point this season which makes the decision to draft Miller or Foreman at the draft very hard. The Texans have been an offence that has proven they can run the ball effectively and rostering the starting RB for the Texans will be highly beneficial, however, we don’t exactly know who that’s going to be at this point in camp as Foreman is currently on the PUP list and isn’t expected to be available for Week 1.

WR: DeAndre Hopkins is self-explanatory, he’s an absolute fantasy production machine that will go in the middle of the first round of your draft. After that for Houston, it gets more interesting as Will Fuller V had a very unsustainable touchdown pace before getting injured last season. Fuller had 7 TD’s on 28 catches and surely won’t keep up that pace again. He’s one of the better deep threats in the league, however, he hasn’t put together a 16-game season yet. No other Texans WR is fantasy relevant currently.

TE: After the retirement of C.J. Fiedorowicz it will be up to Ryan Griffin to take the workload going into the 2018 season for the Texans. Griffin has never caught more than two touchdowns in a season before 2018 but with Deshaun Watson at the helm and nobody in front of him on the depth chart. He will look to be a difference maker in the Houston offense. Griffin is worth keeping an eye on.

Defense: The Texans defense when healthy on paper is one of the best defenses in the league. However, they’re never healthy. Before last season Houston had finished 11th or better in points and yards allowed five of the previous six season. Expect Houston’s defense to find their game and be a top scoring fantasy defense.

Jacksonville was the surprise of 2017 as they won the AFC South with 10 wins and made it to the Conference Championship before losing to New England 24-20. I fully expect Jacksonville to win this division again this year as they have one of the best defenses in football that just seems to be getting better every year.

QB: Blake Bortles despite all the bad rep he gets for being an inconsistent quarterback finished 13th in fantasy scoring last year, which is his worst placing since his rookie season. Previously he finished 4th in 2015 and 8th in 2016. Jacksonville’s new conservative, the run-first offense really lowers the fantasy ceiling Bortles has going forward. He’s no more than a low-ceiling QB2 and probably isn’t worth drafting.

RB: Leonard Fournette came into the NFL as a rookie last season after going fourth-overall in the NFL draft and despite missing three games Fournette finished ninth in fantasy scoring for RB’s and seventh in fantasy points per game. The only thing keeping him from one of the best RB’s in fantasy football is the fact that he isn’t very involved in the passing game. Fournette is Jacksonville’s bell cow and no other Jaguars RB is worth drafting outside of being a handcuff.

WR: The Jaguars overhauled their WR core going into 2018 losing both Allen Hurns and Allen Robinson. However, that opens some space for newly drafted D.J. Chark, recently acquired Donte Moncrief and young guys Keelan Cole and Dede Westbrook to earn more touches and make an impact. The Jaguars have a lot of people around the same skill level at WR and run an offense that doesn’t utilize the passing game, for the most part, the Jaguars WR’s shouldn’t be trusted with regards to fantasy production and I’d be worried about drafting any of them.

TE: Austin Seferian-Jenkins will be tasked with holding the fort down for the Jaguars after coming off a decent season with the New York Jets where he had the best year of his career with 50 catches, 357 yards, and three touchdowns. His impact will be diminished in a run-first offense.

Defense: The Jaguars, in my opinion, are the best defense in football, the had the highest scoring fantasy defense last year scoring a league-high eight touchdowns. It’s worth taking this defense a couple rounds earlier than usual as they will be a set and forget the defense that will help you win week to week.