LETHBRIDGE, AB: One of the greatest things about Rumble matches are the surprise returns. On Saturday, Pure Power Wrestling certainly delivered one for the ages.

The usually-loquacious Perish was seemingly lost for words following his successful return. “Tonight may have been the greatest night of my career in professional wrestling. To every one of the PPW fans in attendance tonight - thank you,” he commented to the WCSN.

Last night marked Perish’s first match inside a PPW wrestling ring since August 24th of last year. That night saw his 238-day reign as PPW Heavyweight Champion come to an end at the hands of both Sydney Steele and Angelica; since then, outside of a single appearance in September 2019, Perish had been nowhere to be seen.

That is, until Saturday.

The standing-room-only crowd was absolutely electric, even prior to Perish’s entrance in the evening’s main event. The event’s preceeding matches had kept each of the fans on the edges of their respective seats for the duration of the show, and with Travis Cole, Brynn Watts, and Boris Beatinov already in the ring to kick off the PPW Power Rumble, the crowd was nearing a fever pitch. All they seemed to need was a slight push to take them over the edge.

What they got was a full-blown shove. The instant the PPW faithful heard the opening chimes of “For Whom the Bell Tolls,” they exploded, with the massive ovation even seeming to jar the former heavyweight champion. However, though it may have been his first appearance in nearly five months, Perish was as impressive as ever in lasting nearly 25 minutes in the evening’s main event.

Unfortunately, Perish was eliminated by Dewey Robson after the latter was able to cunningly shift his weight as Perish attempted to clothesline him over the top rope. However, despite his elimination, he extended his hand in good faith to Robson, who accepted the handshake in a show of respect. However, the handshake proved to be Robson’s downfall, as he was eliminated by Travis “the Heat” Copeland as he shook Perish’s hand.

In an interesting note, Robson is now the first person to eliminate Perish from a Power Rumble following the latter’s victory two years ago and non-appearance last year.

Stay tuned to the WCSN for more from the PPW Power Rumble. 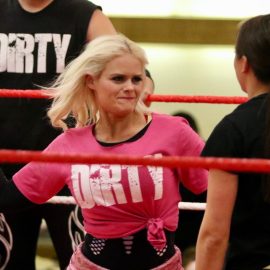