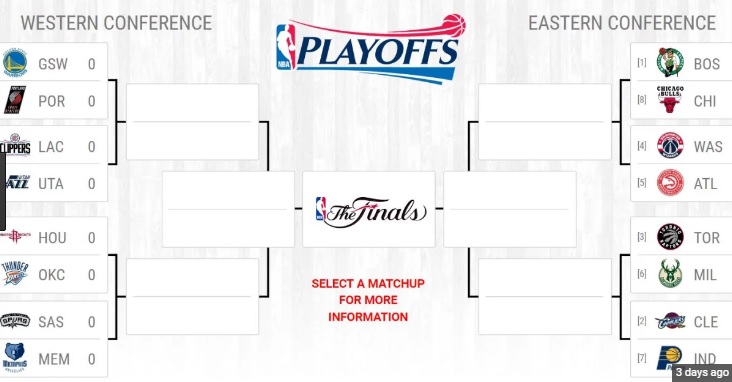 The long and winding road of the regular season has come to an end with eight of the fifteen teams extending their year. The other seven teams are relegated to spectator status and looking forward to the ping pong balls dropping on May 16th, dreaming of screaming “BINGO!” for scoring the #1 lottery pick save for the Brooklyn Nets.

The East had a new leader on top of the conference in the Boston Celtics. However, many claim that their #1 seed status is just that, a number and after the Cleveland Cavaliers and LeBron James dismantled Isaiah Thomas and the Celtics 114-91 on April 5th at the TD Garden, it’s hard to argue. Actually the seeding reminds me of a scene from American Flyers, a movie about cycling, where a person trailing the leader of the stage is actually ahead by two seconds overall.

The Cavaliers might be behind in the standings, but they are really ahead in terms of playoff pedigree and stature. Meanwhile, the Toronto Raptors and Washington Wizards rounded out the top four. The bottom half looking up, jockeyed for position all the way up to game 82, all separated essentially by a game a piece. They are the Atlanta Hawks, Milwaukee Bucks, Indiana Pacers and Chicago Bulls. However, after game one of each respective’s match-up, some may wonder if the standings should have been turned upside down.

The Celtics look to have the deeper team lead by Isaiah Thomas and defensive stalwart Avery Bradley. Thomas has had a career year and arguably put himself into one of the top 20-players-in-the-league conversation along with Avery Bradley’s on-the ball defending, which has got him an All-Defensive team selection last year make them a dynamic back court. However, the Bulls have a superstar in Jimmy Butler and two savvy veterans and playoff tested championship caliber players in Rajon Rondo and Dwyane Wade. While the Celtics had the better and more consistent regular season, the NBA Playoffs are where the stars flip the switch and go to a whole other level. Rajon Rondo has a propensity to shine the brightest on Nationally televised games. Although, these are not the players of five years ago as Dwyane Wade showed and Sports Illustrated so aptly described.

In game one, Thomas played with a heavy heart after learning that his sister Chyna Thomas passed away earlier in the week in a car accident. His performance was admirable, scoring 33-points in a 106-102 loss. Jimmy Butler scored 30 for the Bulls essentially canceling each others production. However, the star of the game was the Bulls 21-year old second year man Bobby Portis, who came off the bench to play 29-minutes, scoring 19-points and shooting 80% from the field. Unless Portis is going to be the next Robert Horry, and Wade can jump into the way-back machine, I think this is the year the Celtics under Brad Stevens finally win a playoff series.Yes, they lost game one and yes their rebounding was horrific. However, it is the 12th time #8 has beaten a #1 in the first game, but only three of them have gone on to win the series. Boston in 7.

The NBA, more than any other sport is about their stars. One could say LeBron James versus Paul George is a marquee match-up. However, the problem is Indiana’s supporting cast. While George has a capable point guard in Jeff Teague, a serviceable big man in Myles Turner and journeyman Lance Stephenson, who at 6’5″ and 230 pounds can provide a body to help in taking turns defending James, George has shouldered most of the load this year. Kyrie Irving is LeBron James’ Robin as was Scottie Pippen to Michael Jordan, doing it both offensively and defensively, starting this years playoffs where he ended last years, clutch.

Despite George’s best effort to put his team on his back in game one, as with this deep three late in the fourth, Irving was crucial in thwarting the Pacers comeback late in the game with two defensive stops and when it counted most.

While I see these games having some theater, two is greater than one. Cleveland in 5.
#3 Toronto Raptors vs. #6 Milwaukee Bucks

Well, the picture describes it all. Giannis Antetokounmpo, aka the Greek Freak is the Toronto Raptors and Kyle Lowry’s worst nightmare. Well, that and their 0-9 record in the first game of round one of the playoffs. Both teams play solid defense. However, it simply comes down to whether or not DeMar DeRozan and Lowry can match their typical average output of 27 and 22-points per game against the length and aggressive defense of the Bucks who tallied up 5 steals and 5 blocks in game one. DeRozan did his part scoring 27 but Lowry could only muster 4-points, while committing 4 fouls. The acquisition of Serge Ibaka at the trade deadline improved their interior but Antetokounmpo still got where he wanted, leaving DeMarre Carroll looking for the candy from the demolished pinata.

GET OUT OF THIS GREEK GOD’S WAY YOU PUNY MORTAL HUMANS ⚡️ pic.twitter.com/X3F5DIzkTo

I implore you to read my colleague Kail Schofield’s breakdown of the Bucks game one dismantling of the Raptors. Despite it being bad karma to root against the Greek Gods, Toronto’s Trifecta will move on. Toronto in 6.

Ultimate series of mediocrity and the epitome of offense versus defense. Atlanta was a #1 seed just two short years ago and a perennial playoff participant. However, they have re-tooled extensively this past off-season but their identity is of a passive team at best. They are once again top in the league in defensive rating finishing 4th overall. However, they are next to last in offensive rating, 27th out of 30 teams. Defensive and offensive rating is how many points they allow and score per 100 possessions. Paul Millsap is their cornerstone and alongside Dwight Howard, form a formidable low post. However, their guard play with Dennis Schroder, Tim Hardaway, Jr. and Kent Bazemore is inconsistent at best. And if we are being honest, Howard is like DeMarcus Cousins, a black mark of death to a team despite their talent.

The Wizards are just the opposite, top third in offensive rating and bottom third in defensive rating. They are lead by John Wall and Bradley Beal, who averaged an identical 23.1 points-per-game. Otto Porter, Marcin Gortat and Markieff Morris round out their starting five. Moreover, Washington plays with passion, sometimes unbridled, but passionate nonetheless. To demonstrate, during the regular season, they all dressed in black before a Celtics/Wizards match-up. This was done to make a point they were going to the Celtics funeral in a retaliation to an on-the-court-after-game trash talking skirmish in a previous match-up. Over zealous? Maybe. But they have fire.