It’s been just over two months since Randy Myers defeated Schaff to become the 7th-ever DEFY World Champion, carrying on the legacy of champions such as Artemis Spencer, Shane Strickland and more. The title gives Myers yet another reason to espouse his love of the promotion, which he’s done on a frequent and consistent basis.

Recently, Myers joined us on the Conversations With Love podcast to discuss his love of working with DEFY Wrestling as well as the honour of carrying the promotion’s championship. The full interview can be found here in advance of tomorrow’s release.

His love of DEFY Wrestling:

“When I got involved with DEFY, it was at a point where I was taking my first-ever break from professional wrestling. I’ve been doing wrestling for the last twenty years, so I’ve been going, like, every weekend, (a) couple shows for quite a while. And then, it was a time where I developed some mental health issues that I’d kind of needed to focus on, so I’d taken a step away from wrestling. But, then, there was a big show at DEFY down in Seattle, and they had Davey Boy Smith versus…who was he wrestling that night? It was a stacked card, and I needed to go down and I needed to witness this live. So, I went down. I had heard good things, I went down, had some friends down there, and I was blown away when I saw the product. The fans were incredible, the actual in-ring was awesome, and just the vibe was phenomenal. So, I just went down there as a fan and was blown away.”

“Then, Matt Farmer, who’s one of the promotors of it, we’ve known each other for quite a while. We toured a couple years, probably ten years ago, eight years ago now. So, we knew each other, and then we kind of got to talking. He sent me a message asking me if I wanted to be on their next show. Like I said, I was taking some time away, but I was so blown away and this kind of rejuvenated me and it got my heart pumping again. It got those juices flowing. So I was like “of course, I’d love to take part in your show.’ I thought I was going to maybe only go down for one, but then the crowd was so loving and embraced me so much that I was like ‘well, I can’t leave. They pulled me back in. It’s like the mafia, right? You try and get out but they pull you back in, but happily.”

Carrying on the legacy of the DEFY World Championship:

“It’s incredible. Representing DEFY as a whole, being in that lineage of champions that (were) just named, it means so much to me. I can’t even really put it into words. I (feel) like DEFY’s what I always wanted from wrestling. I always wanted something that was an inclusive product where you could feel safe as a fan no matter who you were, no matter what kind of place you were coming from in life. Whether you’re a freak, a geek, a misfit, a weirdo, felt that you were strange, or felt that you needed to change, or any of those things. (If) you ever felt that you were different, this is the place for you. It’s so embracing and so loving.”

“To represent a company that is what I’ve been looking for twenty years in wrestling means the absolute world to me, and means every drip of sweat I’ve had, means all the blood, means all the tears that I’ve cried, all the times I said I was going to quit, all the workloads I didn’t want to do but did anyways, all the gross cans of tuna I shoved down my throat, they were all worth it.”

Randy Myers on Working for DEFY, Winning the DEFY Championship 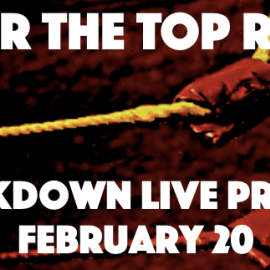