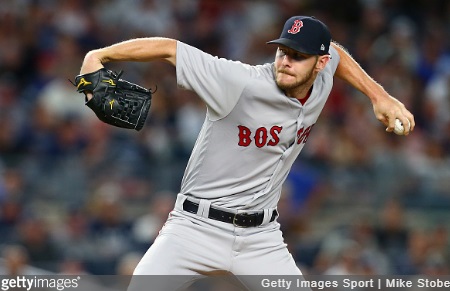 Last December when the news broke that the Boston Red Sox had acquired Chris Sale in a trade from the Chicago White Sox for prospects Yoan Moncada, Michael Kopech, along with Luis Alexander Basabe and Victor Diaz, Red Sox Nation was giddy with joy, like children on Christmas morning.

Dave Dombrowski had looked to pull off a coup, adding an established major league southpaw who just got off a 17-win campaign to join the reigning Cy Young Award winner Rick Porcello (22-4) and 230-Million-Dollar man David Price (17-9), creating a formidable three-headed monster in the AL East.

On paper, he had assembled possibly a starting five rotation rounded out with Drew Pomeranz and Eduardo Rodriguez that could account for 71 wins.

But What about the Cut-Up Jerseys?

Some may have had reservations about whether he was a clubhouse guy or could he handle the Boston Media? Would he be a problem? After all, much was made about his artistic license and carefully thought out plan for cutting up a number of throwback jerseys the day he was slated to start because he didn’t like them. It got him reprimanded and sent home early by the White Sox.

However, after listening to Sale’s side, it was more about someone putting the almighty dollar ahead of winning.

“When I saw that there was something in the way of that 100 percent winning mentality, I had an issue,” he said. “I tried to bring it up and say, ‘Hey listen, these are my thoughts and concerns,’ and they got pushed away because of the business deal that was set in place. I’ll never understand why we need to do something on the business side on the field that might impede us winning a game.” - Chris Sale

All I see is a fierce competitor. You?

Sale Day! The Sox get more than they bargained for!

The Red Sox knew they were getting a 5-time All-star and a Top-5 Cy Young Award candidate who had double digit wins in each of the last five years, but could they ever have imagined he would bring back “appointment television”?

Red Sox Nation has officially anointed it Sale Day every fifth day he takes the mound. It brings back memories of Pedro Martinez, circa 1999. Losing streaks will come to an end. The K crew can once again be gainfully employed and we are treated to an efficient and masterful performance.

He is averaging 10-strikeouts and 1.3 Walks per game over his 24 starts and even started a game against the Yankees, which ended in 2 Hours and 21 Minutes. How’s that for efficient?

In the beginning of his career, Pedro Martinez owned the Yankees, but as he headed into the back stretch, he was quoted as saying the Yankees were his Daddy. Yankee fans never let him live that down chanting, “Who’s Your Daddy?” during the 2004 playoffs.

Karma is…well, Karma comes around. Chris Sale has been filthy against the Bronx Bombers, compiling a 1.19 ERA and 0.83 WHIP. He has held Jacoby Ellsbury, Didi Gregorius and Aaron Judge hit-less. Actually, anyone who is not named Chase Headley or Aaron Hicks has not been able to hit over .182 against him.

Sale has been so good, and not just against the Evil Empire. As of August 16th, he leads the AL in virtually every starting pitching category. In Wins (14), Strikeouts (241), ERA (2.51) and strikeouts per nine innings (12.89). He is also leading with the least amount of walks per nine innings (.166) and has the lowest opposing batting average. Opposing batters are hitting below the Mendoza line at .191.

Sale could make a big push to further his Cy Young argument  by pitching another lights out performance against the Yankees Saturday in a marquee match-up against CC Sabathia, and I think he’s ready after stating on an interview with WEEI recently, “I don’t go to New York to make friends.” Reminds me of someone else who said back in 2004, “I’m not sure I can think of any scenario more enjoyable than making 55,000 people from New York shut up.”

Sit back, relax and enjoy the show, Saturday is Sale Day!