In honor of Black History Month, it seems only appropriate to reflect on the pioneers of professional sports athletes who paved the way for all those who followed in their respective sports.

William Felton Russell, known to many as simply Bill Russell, is an 11-time NBA champion with the Boston Celtics and has the NBA Final’s Most Valuable Player award named after him. Considered by many one of the best to play at his position, and arguably in the game, Russell is a Hall of Fame player and was a perennial All-Star. He played from 1956 to 1969, averaging 15.1-points, 22.5-rebounds and played an unthinkable 42.3-minutes a game. You name the argument for labeling someone the greatest of all time, you will be hard-pressed not to include Mr. Russell.

However, what many people may not be aware of is six years earlier, Chuck Cooper was the first black player drafted in the NBA in 1950. He played seven seasons with Boston, Milwaukee, St. Louis and Fort Wayne averaging 23.2-minutes, 6.7-points and 5.9-Boards.

When people ask who was the first black athlete to play in the majors was, Jackie Robinson is a name many mention. Number 42, Jackie’s number was retired by Major League Baseball in honor of his historic Hall of Fame career and shattering the color barrier of our beloved pastime. He was the rookie-of-the-year in 1947, MVP in 1949 and a World Series Champion in 1955 with the Brooklyn Dodgers. He averaged .311 over his career.

Although, some 50-years earlier, a man by the name of Moses Fleetwood Walker, a catcher, would be the first to play in the Big Leagues in 1884. At 27,  he would play but one year for the then Toledo Blue Stockings where he would hit .263 in 44-games. Don’t believe me, you can read more here.

When you think of the Olympics, Jesse Owens and his incredible feat of winning four Gold Medals in the 1936 Olympic games in Berlin, Germany comes first to mind. He medaled in the 100-meter, 200-meter, long jump and part of the 4×100-meter relay.

Football had black players playing during its club years, but the first black to sign an NFL contract and play for the Los Angeles Rams was a guy by the name of Kenny Washington in 1946 at the age of 28. He was a half-back who played three seasons, who averaged 6.1-yards per attempt. He played his college ball at UCLA and was a teammate of Jackie Robinson.

Willie O’ Ree was the first black player to lace up the skates and play in the NHL. He got his start with the Boston Bruins in 1957-58 season, playing 2-games after being called up to replace an injured player.  His career did not mount to much performance wise, but he did, according to Hockey Reference, play in 43 games during the 1960-61 season as well.

While none of the firsts had stats to make you marvel, their accomplishments nonetheless worthy of mention and prove that desire, with talent and hard work that dreams can be met even in the most adverse conditions. 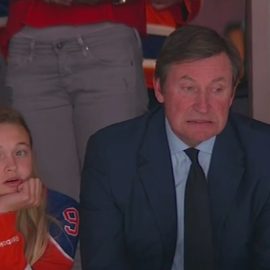 March to the Playoffs: Edmonton Oilers | Game Two vs. Boston