Spencer: No offence to anyone else, but is there really another option? Building on his outstanding debut year, AJ Styles continued to dominate the WWE as it’s most consistent in-ring performer. For my money, he’s the best wrestler in the world, bar none. He said it best himself - he started the year as WWE Champion, and he’ll end 2017 as the WWE Champion. He reclaimed his championship, added two United States championship reigns to his resume, and claimed statement victories over names such as Jinder Mahal and Kevin Owens. He took over the mantle of the Face that Runs the Place, gave Brock Lesnar his best match since 2013, and had his hand raised at both WrestleMania and SummerSlam. Truly, there’s no other competition for Styles throne right now; the only question is whether or not he’ll be on top again next year.

And we’re tapped out! Thoughts, Win Column’ers? Who do you disagree with? Let us know at @WCSportsCA or in the comments section below! 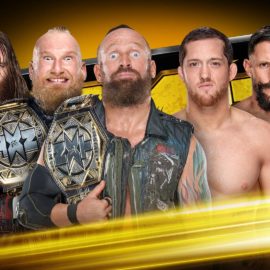