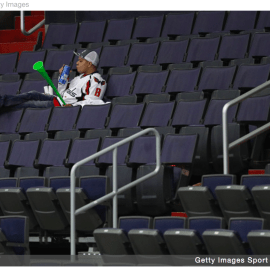 It seems like every year we’re faced with a despondent Alex Ovechkin as he tries to rationalize a short season when things had seemingly been turning in their favor. The Capitals won a stunner in overtime after Sidney Crosby and Conor Sheary went down with concussions in Game 3 in front of a hostile Pittsburgh crowd.

Many thought losing Crosby would be the nail in the Pens coffin, especially when both players injuries were ruled as concussions and could be out for extended time.

The Capitals it seemed would be in the driver’s seat with a chance to do what they had not been able to accomplish in the Ovechkin era thus far…get to the Eastern Conference Final!

In fact, the last time these two teams met in a Game 7, the Penguins captured the win and went on to raise the Stanley Cup for the first time in Sidney Crosby’s career. Once again, the Capitals will not stand in their way.

Backstrom/Ovechkin could hardly speak after. Asked if he could keep the faith he'd ever make it past 2nd round, Ovechkin had no answer.

The Pens may be poised to do it again for Crosby’s third this year, and it could mark the first time a team has won back-to-back Stanley Cup titles in the salary cap era.

A flurry of chances and, well, a Fleury of saves. #Game7 #StanleyCup pic.twitter.com/6MSN0UEBGK

The series started with the Ovechkin vs Crosby narrative, once again the series would be about the two captains casting constant shadows in the others direction. For once, Ovechkin had an opportunity to step out from beneath that shadow cast by Crosby as he was ruled out for Game 4, and possibly longer.

As the Penguins were faced with the unthinkable, another hero would have to materialize to keep the Pens hope alive.

Game 4 was on Pittsburgh’s home ice, and the crowd was prepared to be the difference maker behind backstop Marc-Andre Fleury. The Pens netminder had been superb throughout the playoffs in place of Matt Murray who was injured in warmups before the puck was dropped on the Penguins postseason.

Vintage 2009 Fleury was in the house, and no team had much success solving him up to this point. That wouldn’t change in Game 4 when Fleury came out knowing he would have to heft the hopes of his two fallen teammates and help carry his team to a win.

Fleury was up to the task facing 38 shots on goal and stopping 36. The Capitals netminder Braden Holtby only had to face 18, turning away 15. Fleury had outplayed the reigning Vezina Trophy winner.

Fleury had some downs (allowing nine goals combine in Games 5 and 6), but no one will remember those because he stood tall in a must-win Game 7.

Memories are always short when you finish the hero.

Backed by Marc-Andre Fleury, #Penguins get their 1st ever Game 7 road shutout- just the 10th in NHL history (1st since TB at NYR in 2015 CF)

Of course, for Fleury there is still work to be done, but he is proving that even as a backup for much of the season he is ready to do whatever his team needs to keep checking off wins. He now needs only eight more to end the season with a Cup, and if he does, Penguins management will have a very interesting summer as they have two netminders worthy of starting and only one can stay.

Vegas will almost certainly relieve them of whichever one they do not protect unless a trade materializes. Nearly every other GM will tell you this is not the worst problem to have.

Holtby for his part has been nothing short of spectacular since he broke out a few years back. In fact, he has been so consistently good it is hard to imagine he could ever be pulled in a playoff situation, yet he was pulled in Game 2 after allowing three goals on just 14 shots.

Unfortunately, the steadiest hand between the pipes for the better part of the last five seasons was simply ordinary at times throughout the playoffs. Whether it was fatigue or injury, we may never know, but it was clear that Holtby was not quite ready for prime time in both the Toronto series and the Pittsburgh series.

But this year’s disappointment can hardly be hung solely on the Capitals netminder. While he certainly contributed, there is one player likely to garner a mountain of scrutiny in the coming days and months.

Ovechkin is a big personality, and that has also made him a big target. Ovie is a talent for sure, but when the spotlights get hot, he melts into the background.

I hate to be that guy, but Ovechkin hasn't been particularly noticeable tonight. And I guess that's the one thing Washington's missing.

Ovechkin was on the ice for both goals against in Game 7 and was directly responsible for one of the two as he made a weak attempt at getting the puck out and it quickly got siphoned off to the front of Holtby’s crease where Patric Hornqvist called in the Capitals tee time.

The air went out of the Capitals sails, and Ovechkin was virtually invisible after that. In fact, six forwards had more ice time in Game 7 than the Capitals captain. A trend that had been brewing since Game 1, the only game that Ovechkin led the forward corps in ice time in the series with 23:19.

By Game 7, he was limited to 18:22 (which was about a minute longer than he earned in the prior two games). If the Capitals were sending a message, it came off loud and clear.

No, Ovechkin is not singlehandedly to blame here either, not even close but when you get the biggest paycheck and you have the most star power, people tend to notice when you have a power outage. These are the breaks for the captain.

While ‘next year’ has been the running theme as the Capitals had cleared out their lockers ahead of the Conference Final every year except for three when they didn’t make the postseason at all during Ovechkin’s tenure.

This year has a bit more uncertainty to it, as this was the first time since Ovechkin was named captain on January 5th, 2010, that there were serious doubts about his leadership abilities.

Sure, there have been whispers every year, but they always seem to dissipate quickly when Ovechkin returns to the ice in the fall and does something spectacular. This year, there is a finality that seems to be hanging over the team, one that has everyone bracing for grand scale changes.

After all, their roster gets better and deeper every season, but they always seem to hit the same road block that they can’t seem to get through. T.J. Oshie was supposed to be the catalyst last year, and Justin Williams brought that championship pedigree.

This season, they added Kevin Shattenkirk shoring up an already deep blue line.

The team gets bigger, stronger, more experienced, but nothing changes.

Still, they are bounced again by their arch nemesis the Pittsburgh Penguins. Even though they played the entire series without their top netminder, without Crosby and spark plug Sheary for a game, and undoubtedly both finished the series without being at full strength.

Not only did the Caps fail to capitalize in a game without Crosby, but they failed to close out when they had the Pens on the ropes. They came back to tie the series and seemed to have gotten in the head of Fleury with back-to-back games of four or more goals.

They should have come out with a fire in their hearts ready to take it to the Pens netminder early and often. They threw eight shots on Fleury in the first 20 minutes.

The Caps looked as though they were preparing to walk through hell, not potentially punch their ticket to their first Eastern Conference Final appearance in Ovechkin’s career.

Their first since the Caps lost in the Stanley Cup Final in 1998.

Barry Trotz has been in large part responsible for changing the narrative around Ovechkin since he came in at the start of the 2014-15 season.

He had an immediate impact on his star winger as Ovie started to play a more team first style of hockey. He was working to be more responsible defensively and generating more chances for his linemates making the team a much more balanced and formidable opponent.

People were quick to recognize the growth in his game, and many believed Trotz was the pied piper who finally got through to the captain.

But, even Trotz has his limits. For the first time as the Caps bench boss, it was clear that Ovechkin was no longer the guy that Trotz wanted leading the charge as the minutes ticked down on their season.

When asked about Ovechkin's performance in Game 7, Trotz says "emotionally, I don't want to answer that right now." #Capitals

Ovechkin was relegated to third line minutes for much of the series with a $10,000,000 price tag flashing like a neon sign over his head while he looked on as not one but two goals sailed past his netminder on his watch in Game 7.

At the start of the night, there would only be one winner. Both teams came in with a 50/50 shot, but from the start those odds seemed to turn rapidly as the Penguins stacked the deck. One captain led his team to the Conference Finals, the other did not.

So while the Capitals lick their wounds and wonder about what the off season may bring whether it be changes at the helm, big player moves, or just a few minor tweaks if the management team is still feeling patient (which seems unlikely).

Each player will have longer than they had planned to pick apart another President’s Trophy winning season that landed with a thud.

The one thought that might finally be clear to all who have believed so wholeheartedly that their captain was the hero in this fairy tale and the man who would lead the team to the promised land and help them hoist the Stanley Cup, is that it’s time to look at all the options.

For once, they might be thinking something different. This ship is in need of a captain, one that will stand tall no matter how hard the waves crash against them and perhaps that man isn’t number 8.

As the clock ticked down on the season, he was not the man carrying the load. In fact, six others shouldered a bigger burden leaving one big truth bomb that the organization will have to weigh ahead of next season.

Ovechkin was the anchor, not the oar. 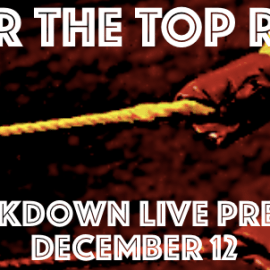