NXT airs from Full Sail University this week, headlined by a rematch between Roderick Strong & Pete Dunne. While the first match was fantastic, expect this round to be much different, as it does come with a role reversal - Strong is now the heel after aligning with The Undisputed Era, making the Bruiserweight the de-facto babyface/tweener in this situation. Will we see Pete “rip Roderick’s head off” as he promised a few weeks ago? Maybe Roderick’s jet lag from his trip to Saudi Arabia will help Dunne! Only time will tell. But for now, let’s take a look at the rest of the show! As always, I’m @Parkman15Love, here with your official NXT Preview!

First, a recap of the April 25 Episode:

Note: Spoilers are available here on Win Column! Read at your own risk!

As talked about, Pete Dunne will try and get some revenge on Roderick Strong. Now, spoiler alert for some, but British Strong Style vs Undisputed Era has already been booked for the UK Tournament, so that leads me to believe that there will be a Dusty finish here. That being said, seeing these two switch roles for this match should lead to a bit of a better story in the ring, but the match quality is something that shouldn’t be questioned. There isn’t much more that needs to be said. These two are fantastic & should have a fantastic match.

Also, how much more interesting are all parties involved? My only hope is that this eventually leads to British Strong Style becoming a faction within WWE.

In a match-up of teams that fell short in the Dusty Rhodes Classic, we’re about to see TM61 take on the Street Profits. I cannot doubt the quality of TM61/The Mighty/The Mighty Don’t Kneel/ whatever new name they have now, but I just have no real reason to care. WWE released two hype videos for them that we’re great, but since then we haven’t heard anything. The Street Profits, too, don’t do much to move the needle for myself. With neither of these teams seemingly having a shot at becoming the next tag champs, I just see a match that has no real stakes here.

With her husband out due to the worlds best heel (he spoiled Infinity War, that will get him even more heat then normal), Candace LeRae takes on Bianca Belair. It should be nice to see Belair in something other then a squash match in NXT, and LeRae is a great hand in ring. These two deserve more spotlight then what’s been given, and hopefully they impress tonight!

Also, Kona Reeves is back and calling himself “The Finest”. Ok. Granted, an overconfident D-Bag is all the more likely to get people to boo you, so I’ll be open to this

Correct me if i’m wrong, but has Shayna Bazler been in an NXT ring since winning the title? I guess she should have a #1 contender sometime soon, but you could have her squash a couple people now and then. One man’s opinion, but it’s my article and I can do what I wish!

After laying out every member of SAnitY last week, Aleister Black looks absolutely dominant as NXT Champion. With over a month to TakeOver: Chicago, how will they keep his momentum up? And who will be the next to step up? Right now it does look like Ciampa. I would be extremely interested to see that matchup, especially with some sort of stipulation set up in it. Perhaps a last man standing match?

As well, Adam Cole is still North American Champion after defeating Oney Lorcan (with lots of interference). Adam Cole’s booking confuses me a little. On one hand, he looks dominant (winning War Games, winning the North American Championship). On the other hand, you have him lose contested battles to Lorcan. Yes, I know making him a chickenshit heel does get heat & make it seem reliant on the rest of the team, but it wouldn’t hurt him to win a match somewhat clean. Again, just one man’s opinion.

Since we talked about Roderick, I’ll use this space to just state Kyle O’Reilly is a gift to this world.

That’s all from me folks! Has NXT done enough for you to tune in this time? If you want to talk NXT or wrestling, tweet me @Parkman15Love and follow us on Twitter & Facebook! Thanks, as always, for reading!

The Week in Review: The NHL Edition Week 2 with Updated Pool Standings. 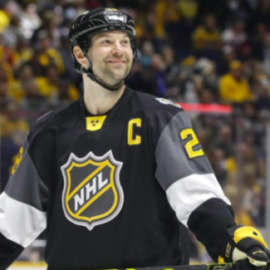 An In-Depth Look into Each All-Star Team